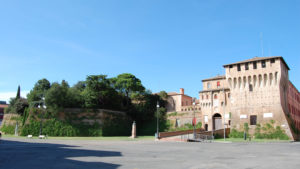 The stronghold of Lugo is a remarkable specimen of its kind, especially because in Romagna fortresses used to characterize and mark the developement of hurban settlements since the second part of the Middle Ages. But the most important period of Lugo’s stronghold developement is the one corresponding with the Este domination here, which goes from 1437 to 1598, during which time the structure and its defensive system were deeply modified.

Several aspects of the XV century structure are still present, although sometimes hidden by more recent alterations: today it’s still possible to see the square structure, whose centre is the inner yard, and some parts of the towers. 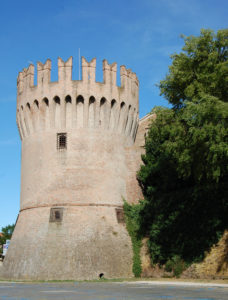 What we see today is more or less the way it used to look at the end of the XVI century, when Alfonso d’Este II wanted the stronghold to be destoyed, since it was useless, to have a wide area to be used for fairs.
When Lugo became part of the Papal States, the fortress was widened, while partially losing its castle structure; at the end of the XVIII century, a Hanging Garden was added too.

Although it’s not an historical piece, the hanging garden of Lugo fortress is extremely characteristic, thanks to the setting where it lays. The evocative meaning of the hanging garden, full of symbols, is here well expressed. The hanging garden is a tiny representation of the universe or of paradise, especially since its hanging on earth, and its linked to plenty of symbols that nature has always inspired to human imagination. The passage which leads to the hanging garden from the inner courtyard of the fortress is just forty years old.

Since 1847, the fortress houses the town hall; there are some halls for official meetings which have particular historical and artistic value. 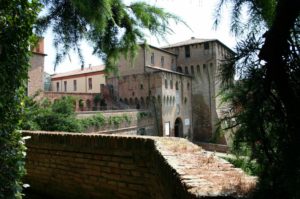 How to get there
Historical town centre. Car and bus park. Partially accessible to disabled.

Open on: open upon request