The facade of the church, dating back to XVII century, looks on the main road to Bologna. After the decay of trades with Ferrara, this road became the most important commercial guideline.

According to the tradition one evening in May 1496, a merchant from Faenza was travelling along the mill road by Lugo, when he and his s cart fell down into the ditch. Following to the accident, the holy 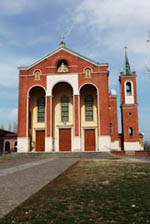 image of “Our Lady with the Child” he had with him broke and some fragments remained into the ditch. The image was reconstructed and kindled popular devotion for the miraculous properties. Later on, Ercole I d’Este commisioned to the “Compagnia del Limite” the realization of a chapel.

The church has three naves with pointed arches which are the results of relevant alterations of the original plan dated 1497. In the bottom there is a little temple that preserves the holy image. In a later period, beside the two lateral naves, four minor chapels were built together with the belltower standing right of facade. In 1796 Lugo was sacked by the Frenchs and the church completely robbed. During a restoration in 1849/50 the inner decorations were fully removed. The present building was finished in 1943, but in 1939 Prof. Govi started the apse decorations.

The famous town fair took place in the area surrounding this church. In this occasion, on the 16 of August 1612 a terrible fire broke out; therefore the Town Council decided to move the event. Since then, the fair has taken place in the area in front of the Fortress thus contributing to decrease the afflux to the sancturay.

How to get
2 kilometers from town centre, direction Bologna. Car park. Accessible to disabled.