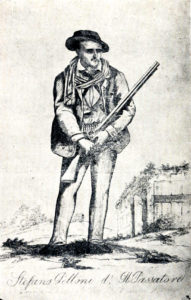 Stefano Pelloni was born in Boncellino, a little village near Bagnacavallo in 1824 and died in the territory of Russi in 1851. He was one of the most famous bandit of our territory during the XIX century.

Stefano Pelloni was born on August the 4th in 1824 in the countryside of Boncellino, nearby Bagnacavallo; he was the youngest of numerous brothers and sisters.
As a child, it was soon clear that he wasn’t made for school, study, rules and especially for the religious career which his parents might have liked him to embrace.

After being convicted for various crimes, he spent time in jail and escaped various times, until he went on the run and created a criminal gang which he headed with the name of “Il Passatore“, a nickname which he got from his father who was a ferryman across Lamone river.
From 1849 to 1851 his brigandage activity was very powerful and scaring in the provinces of Bologna, Forlì, Ravenna and Ferrara, sometimes even in the Grand Duchy of Tuscany, and he was challenging both the Austrian rulers and the Papal State.

He invaded and made robberies in several towns like Bagnara, Cotignola, Brisighella and Forlimpopoli, he stole to a lot of people and killed many, he assaulted several times the stage-coach of the Papal State and was able to organize his own group of outlaws which was made of many people.

He is mostly famous for assaulting, with his gang, the audience of the theatre in Forlimpopoli on January 25th 1851. Halfway through the show, when the curtains lifted, the bandits appeared and the members of the audience were robbed and kidnapped for more than three hours; some were even taken home or were forced to give access to other people’s houses for further robbery. Amongst the victims there was also Pellegrino Artusi’s family, whose sister suffered from severed mental health problems following an assault.

On March the 23rd 1851 “Il Passatore” was killed in a firefight in the Molesa estate, nearby Russi and just few km from his father’s home.