THE DIALECT OF ROMAGNA – A living language

The dialect of Romagna, this ancient “contemporary language” of neo-Latin origins, isn’t just a folkloric component, but also a key to local culture and somehow an important part of the landscape.

In Romagna the dialect is commonly spoken, also amongst young generations. Bassa Romagna can
be considered the main breeding ground for this idiom; as a matter of fact the distinguished Austrian glottologist Friedrich Shürr, who carried out scientific studies of the structure, grammar and phonetics of the dialects of Romagna in the first half of the 20th century, was made honorary citizen by the mayor of the near Ravenna. 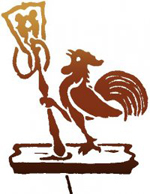 We are presenting here a brief cooking glossary of the most recurrent words and terminology; a helpful tool for those approaching the culture of fine living rooted in this land.
l’azdòra: the woman in charge of the smooth running of a house
i caplèt: cappelletti (pasta with stuffing)
e’ garnadël: small broom made with broomcorn
al lisègn: tagliatelle
i pasaden: passatelli, a kind of pasta
la piê: piadina, typical round flatbrad from Romagna
e’ s-ciadùr: the rolling pin
la spoia: sheet of pasta
e’ tëst: thin and flat clay disc used to bake piada
e’ tulìr: the board for pasta making
e’ ven: wine
e’ zöch: large log for the fireplace
i zucaren: traditional biscuits made in various shapes