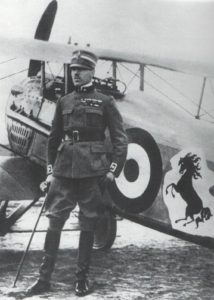 Francesco Baracca was born in Lugo on May the 9th 1888 and died in 1918. He was an aviator during the First World War.

He attended high school in Florence, and then, in 1907 he entered Modena Military Academy, from which he graduated two years later as second-lieutenant.
After one year spent at Pinerolo’s cavalry school, in 1910 he became part of the 2nd infantry regiment named “Piemonte Reale”. During those years, he decided to attend a flying school, and in 1912 he gained the pilot’s licence in France, in Reims, after he also took the Italian civil and militar pilot’s licences.

As lieutenant, in 1914 he was assigned at “Battaglione Aviatori” (the air force). On the 7th of April he won his first battle in the sky of Medeuzza, the first official battle won by Italy, and he was awarded a silver medal for military valour. At the end of that same year, he was raised to the rank of flight lieutenant.
In 1917 he began to use, as his personal badge, a black horse with its fore feet raised. On June the 19th 1918 he took off for his last mission: he was shot down on Montello and he was found dead just four days later.

The ninety-first squadron is still dedicated to Francesco Baracca. He was awarded three silver medals and a golden one, beside other decoration awarded by France, Great Britain, Serbia and Belgium.
He is considered the greatest winner of battles of the Italian Army during World War I.

In Lugo there’s a museum dedicated to Francesco Baracca which carries the name of the World War I hero (it’s located in Via Baracca, 65 – Lugo).
Inside the museum it’s displayed his French airplane SPAD VII; with this airplane Baracca gained one of his 34 victories. The museum houses also several personal objects and documents of Baracca and of his times, and also a G91Y, which is gift by “Accademia Militare Italiana”.

The museum is the hart of a journey in the town of Lugo which includes the famous monument by the sculptor Domenico Rambelli (built in 1936) and the chapel where the hero is buried in the town cemetery.