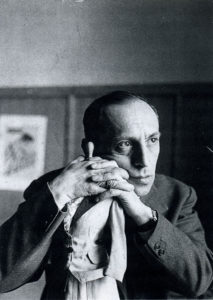 Leo Longanesi was born in Bagnacavallo in 1905 and died in Milan in 1957. He was journalist, designer and editor.

He graduated in law at Bologna University and began working as a journalist; not much later he was founder and head of some national important weekly magazines, amongst which “E’ promesso”, “Il toro” and “L’Italiano”. In those same years, he collaborated with Mino Maccari at the magazine “Il Selvaggio” and became part of the literary group “Strapaese”.

Longanesi also made graphic works in a way between Giorgio Morandi, who was a dear friend of him, and the historical examples of Daumier, Toulouse-Lautrec and Grosz. He exhibited his graphic works in several national and international exhibitions, and at the top of his career stands the important exhibition at the Milanese gallery Galleria Barbaroux which was held in 1941.
After World War II he founded his own publishing house of which he was the director.

The municipal library of Bagnacavallo, located in the town museum ‘Le Cappuccine’, owns a collection of Longanesi’s publications and magazines, which are also exhibited in shows.