He was born in Livorno in 1863 and died in Rome in 1945. He was a great composer of opera musics. His greatest love was Anna Lolli, a choir singer from Bagnara di Romagna.

Mascagni was born in Livorno on December the 7th 1863.
At the age 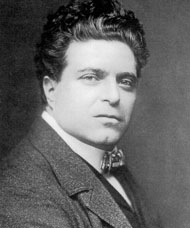 of ten he began attending gymnasium and, few years later, also music lessons; he was especially studying piano and taking singing lessons. From 1876 he started to study music much more regularly with the tutor Alfredo Soffredini, who was the founder of “Istituto Musicale Livornese” (the institute of music in Livorno) and Maestro himself. In 1880, Pietro composed his first pieces of symphony and holy music.
In 1882 he moved to Milan, where he entered the Conservatoire; but after just three years, due to a controversy engaged with the Conservatoire’s director, Mascagni left it and gave up regular studies.

To earn his living, he started travelling along Italy working with operetta companies as orchestra conductor.
In 1886 he felt in love with Argenide Marcellina (Lina) Carbognani whom he had met in Parma; the married just two years after in Cerignola’s cathedral.
In 1890 he won the competition publicized by Sonzogno publisher for a one-act opera, with “Cavalleria Rusticana” that, during May of that same year, had its debut at Teatro Costanzi in Roma, gaining a tremendous success which followed also in many other Italian and foreign theatres. From this time on, Mascagni will be on tour frequently.

On August the 2nd 1945, Mascagni died in his private room at the Hotel Plaza in Roma, where he had been living since 1927.

Pietro Mascagni’s greatest love was Anna Lolli, a charming choir singer from Bagnara di Romagna, where it’s kept, in the museum located inside the church’s parsonage, the important collection of their

letters (they are almost 5,000) beside other documents of their love story.
Pietro and Anna met in 1910. Soon after, Anna moved to Rome to be closer to the musician. She was for him a wise counsellor, while helping him in hard times and giving great support in his work. She could live with him only during the composition of “Parisina”, from July to December 1912, in France, together with Gabriele D’Annunzio and Emy, Pietro’s daughter, who helped him to keep his love story as a secret to Donna Lina. “Isabeau” and “Parisina” are both dedicated to Anna Lolli.